Let me warn you that in this letter I am going to speak the truth.  Women who are pregnant should not read further.  As you know, some of my favorite commentators, who until now have been my heroes, have ganged-up on my numero uno hero, Ron Paul.  These attacks have befuddled me, causing me to try to calculate how many second-tier heroes add up in value to one top-tier hero.  I have come to a provisional answer.  However, because I am not good at math, I am asking you to check my work.

I begin with Rush Limbaugh, who has been my inspiration for years.  He speaks for us in The Only Party There Is.  Here he is, attacking Ron Paul:

And then there is the best of them all, Michael Savage, speaking negatively about Ron Paul.

The only voice of reason out there is Glenn “Listen to me!!!” Beck.  Here he is, defending my man:

Life is so confusing!

What happens when the people like Limbaugh, O’Reilly, and Savage, whom I have listened to and respected for years, turn out to be wrong?  Massive waves of bewilderment come up like nausea.  Suddenly, everything I thought I knew to be true turns out to be wrong.

That’s me, the boy in dark green in the front

Before she left with the dogs and the guns, my wife accused me of being an obnoxious persona, of being in a state of perpetual infancy, unable to enter the next stage of development.  She once even told me that it takes a certain degree of depth to be a hypocrite, but that, in my case, I wasn’t capable of being even that.  I assume this was not a compliment.  But I think she would be proud of me now, to see the progress I have made.  Please allow me to give an accounting of my growth.

Before I discovered (to my chagrin) that Limbaugh and Savage and O’Reilly and Beck were not in accord about the greatness of Ron Paul, I sought for the truth beneath the surface of things.  I did not believe in appearances, only in what lay beneath the surface, in what was the ‘hidden truth.’  Finding the opinion makers in discord sent me into a depression, and I wound up taking a journey into the underworld.

Once in the underworld, I entered the Cave of Spleen: 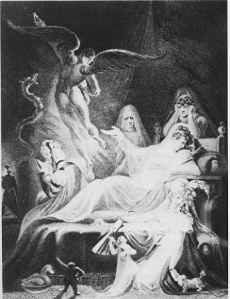 And I did battle with the monster:

And I was victorious! I did not eat the cookie!

Now that I have come through this difficult internal struggle, this long night of the soul, I have awakened, refreshed and enlightened.  New truth has rushed in upon my mind.  Descending into the underworld and defeating the monster allowed me to behold the way things really are.  Now I have risen from the depths to achieve new heights of understanding. 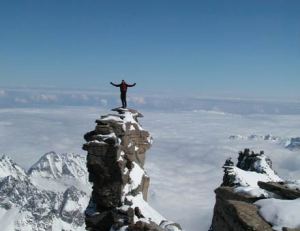 Here is a thumbnail sketch of my hard-earned insights.  I have discovered that credulity is a more peaceful possession of the mind than curiosity.  Preferable is the wisdom that interacts with the surface of things.  Pretended wisdom interacts with interiors and depths.  When a person dives into the depths seeking knowledge, he or she comes back up with the discovery that the depths are good for nothing.  If one searches into the depths far enough, one is not going to find a soul or consciousness, just a pineal gland.  One finds that the machine has no ghost.

Which is to say, fictions can be said to exist just as much as anything in the memory.  Because reality is fading, insipid, and generally insufficient, happiness is based on appearances, delusions, and fictions.  Appearances therefore are real, more real than truth, which, in the final analysis, is mere surface.  Surface is the truth!  Things imagined may properly be said to exist even more intensely than what occurs in reality.

This discovery—of the truth of appearances—has made me reevaluate other platitudes. Why bother with the long term, with tomorrow, with ends, purposes, tendencies, implications, essences?  The surface, the appearance, today, are all that matter.  Without tomorrow, coherence as a virtue disappears.  What would be the point of being consistent?  Not that I have grown tired of my principles, but I now am learning the art of compartmentalizing my thoughts, sectioning off parts of my mind, closing up certain rooms that do not need to be used.  From hereon in, I will aim to speak and write in a patchwork of utterances.  In the end, that is all any of us are, patchworks.

To finish the account of my development, this bildungsroman without a plot, I was like one of these little figures, cute but not very knowing.  I listened to Limbaugh, O’Reilly, and Savage, without thinking, without thinking to question them.

Which one did Rev. Jerry Falwell say was gay?

But now that I have undertaken my journey into the underworld, now that I have beheld the way things really are, now that I have grown wise, I am more convinced than ever that Ron Paul MUST BE our president.  And I also have decided to stop listening to Limbaugh, O’Reilly, and Savage and only listen to Glenn Beck.  That is the wisdom I have achieved.  Haven’t I come far?

Now, about that math problem I mentioned earlier . . . .