Waiting for Mr. Potter: As your favorite amateur controversialist, I am weighing in, to make my views known, as I always do. I now am supporting Ron Paul. As you know, Mr. Potter has chosen not to enter the race.

No campaign organization, but reported to be well financed

And I do like Ron Paul, mainly because his name is really two first names. He’s a man with no last name. And that’s good enough reason, to support him, when you think about it. Or at least think about it in the way I think about things.

Where is Mr. Potter?

We are angry, and we want a candidate who will shake things up and bring back jobs. That’s why I wish Mr. Potter would enter the race. He’s the only potential candidate who knows how to create jobs and get America working again. Even if it just means working for him. If only he would run . . . . In the following clip, Nick, the bartender, who works for Mr. Potter, captures well our fiesty mood.

But back to Ron Paul. Ron Paul. His name sounds vaguely popish, like “Ron Paul II.” That aside, not having a last name in the past was perceived to be a problem. Many heroines of eighteenth- and nineteenth-century British novels thought not having a last name was a problem: Emma, Pamela, Clarissa, Amelia, Evelina . . . . That’s because they weren’t American. What could be more American than not having a last name? Having only first names is similar to Ron Paul’s philosophy: first names indicate the individual part of a person, what makes you you, while the last name signals affiliation with a social group such as the family and the community. But his very name reiterates his message: two first names is like individuality times (x) two; the absence of a last name signifies no tie to the larger community. Hence, his name = total individual freedom. Pretty cool, eh!

The Man with No Last Name

I thank God that when Ron Paul was young, he never read John Donne’s Meditation XVII (“No Man Is an Island”): that might have ruined everything. However, he didn’t, or at least never seems to have, judging from what he says, and so he suits me quite well.

Everyone who writes a letter to the editor should have a personal philosophy, and here’s mine. I don’t believe in Darwinism, but I DO believe in social Darwinism. And for this reason, I think Mr. Potter would be better suited for the job of running the country, better suited than even Ron Paul, but, as I said, he’s not running. . . . (sob!). Don’t make me have to sing a torch song for you!

Since we don’t have Mr. Potter, Ron Paul will have to do. No Sir Mitt Romulus for me! Ron Paul will have to be the one to lead the Restoration. (RESTORATION, not revolution!) Not like the one in England in 1660, but more like the “Take Back America!” one. Except, . . . now that I think about it . . . I am a little confused. What’s it supposed to mean? Was it that, once we got America home from the store, we found it was defective, so we are pondering whether to take it back and get a refund?

Or did America do something wrong, like being unfaithful, but is tearful and sorry now, so we are supposed to forgive her, and take her back? 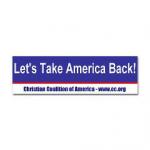 Maybe the problem is that it is not phrased right, as in the word order. If the message is supposed to be solely political, shouldn’t it really be “Take America Back,” like, Take America Back TO THE GOOD OLD DAYS BEFORE THE PIXIES RUINED EVERYTHING? After all, on Ron Paul’s lawn signs, right underneath his name, it says “Restore America.” This “Take America Back” wording better captures our Restoration theme. Why look forward when you can look back?

Looking at the world through the rear-view mirror

Seems like there’s some ambiguity here. My wife, before she left with the dogs and the guns, like I talked about somewhere else, once said I wasn’t any good with ambiguity. One time she even yelled, “What is it about AMBIGUITY you don’t understand?” But that’s a whole ‘nother sad chapter in my life we don’t need to go into . . . . So much to be confused about, so little time!

So we “Take Back America” or “Take America Back,” either way, so long as the strong prevail again. Over the weak, I mean. Let the pixies know who’s boss. THAT’S WHAT I SAY! And I don’t mean the band. Once again, I’m with Nick, the bartender. Like Joe, the Plumber, Nick has a way with words. Nick works in a bar owned by Mr. Potter, who knows a thing or two about creating jobs.

And Mr. Potter has done great things for Pottersville, just as he would do for America. If only he would run . . . .

What America could be, or already is, depending on your point of view

I am still kind of hoping, in case you haven’t noticed, that he’ll change his mind and throw his hat in the ring ..

Only problem with Mr. Potter is, he doesn’t have a first name. So I am not sure if he really stands for individual liberty the way Ron Paul does. Oh, . . . wait, . . . yes he does, he does have one . . . I just spotted it in that second to last clip. It’s Yrneh.

Hmmm. Odd first name. What could it mean? Must be something to do with ambiguity.

One last thought. Let’s look at that debate photo one more time . . .

Could that be Mr. Potter, on the left?

I guess it’s time to wrap up my long, rambling letter. Even though I have been referred to as Jacksonville’s foremost fumbling controversialist, I still insist on making my views known. And just as I promised, I have made them known. As I always do. You can count on me.