Unsuspecting Jacksonvillians need to be informed about the planned installation of two roundabouts, or traffic circles, one at San Marco Blvd and Landon Avenue, the other at San Marco and Naldo.. 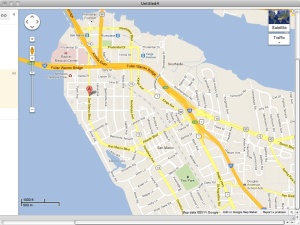 Close up of San Marco where two roundabouts will be installed next year.

As with ‘Obamacare,’ a little bit was not enough for them: they are going for two!

Nothing smacks of nefarious European Socialism more than a roundabout! I am not the only one to notice this:  Are Traffic Circles Horrific or Just a Socialist Plot?

Prepare to bow down to the power of the state!

Roundabouts cause one to go around in circles: the simplemindedness they create is well documented in the YouTube video “Will Ferrell Loves That Door”:

And once you get on a roundabout, there is no getting off. .Which brings me back to Robertson’s aptly titled letter, “Here we go again”—the very thought that occupies the mind of someone trapped on a roundabout. In the 1970s, Americans bravely resisted the socialistic metric system. Now, when it comes to building traffic intersections, it again is time for us to resist. So, I say, ‘Support the right angle!’ If you approach a roundabout, don’t give in! Be an American! This video demonstrates what to do:

Are you willing to be a true American? Yes? Then let us hope you will gun the engine, hold a steady course, and defend the cause of freedom. Thank you for giving me this opportunity to tell you the truth. You will be hearing a lot more from me, for there is a lot more truth to tell.