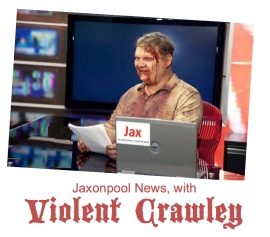 Jacksonville News with Violent Crawley:  It was charged today that for nine months a local Jacksonville group, the Vince Foster Society, or VFS, became the object of Internal Revenue Service (I.R.S.) harassment. At a press conference Lemule Blogiver, the VFS’s founder, accused the government of forcing his organization to wait nine months before finally granting it tax-exempt status as a non-profit group.

“We are the innocent victims here,” said Blogiver. “Our only intention has been to serve the public. For that, the Obama administration’s jackboot came firmly down on our necks.”

Blogiver alleges that his conservative Tea Party group’s application for tax-exempt status was singled out and made the object of special government scrutiny. “Nine months was a terribly long time to have to wait,” complained Blogiver. “Without a doubt, they were trying to intimidate us.”

Upon reporters questioning, the group’s founder acknowledged that the I.R.S. eventually did grant the VFS the tax-excempt status it sought.

The press conference took place at Sherwood’s Bar located beneath the east end of the Fuller Warren Bridge. Afterwards, the drinks were on the VFS spokesperson. He asked the bartender for a formal receipt.

The Vince Foster Society now is fully functioning as a 501(c)(4). Since receiving tax-exempt status, it has been operating as an advocacy group promoting the social welfare by reminding people that Bill and Hillary Clinton killed Vince Foster.