I’m getting tired of having to provide exact details for examples of things that everyone should know happened. Like, the bear rapture. To infer that evidence is so insubstantial that it is a non-issue is yet another example of people denying that things have happened. Or, more likely, they just ignore these events because it makes it easier to continue justifying their ignorant views. So let me put it plainly. The bear spotted roaming southern Jacksonville was left behind. All the other bears were raptured. Do I need to spell out what this means?

Let’s avoid Reality Dysmorphic Disorder (RDD) and take a common sense approach. Some people have been wondering why the rapture has not happened yet among we humans, as is portrayed in this artist’s rendering:

Other people think that we have entered the end-times and that the impending rapture-i-zation will be dramatic, something like what is depicted in this movie trailer:

However, let me set everyone straight. I have news for these people who anticipated that God would come back in the way Timothy LaHaye said He would in his Left Behind series. Everyone had their hearts set on an adrenaline-driven, end-time narrative in which great drama would occur. However, the whole eschatological plot thing turned out to be a bust. A complete disappointment. A two-thumbs down event. Just as I predicted. People who were expecting something more, like a spectacular apocalypse, must not have had sufficient diversity in their information diet. The reality-check is this: things rarely are as dramatic as people predict, and that is what happened in this case. I knew the end of the world would be no different. It would be like everything else. Not very interesting. And I was right. People wanted a bang, but they got less than a whimper. .

So much less than a whimper, in fact, that everyone entirely missed it. But the truth is, the world has already ended. Yes. The rapture already has come to pass. So unremarkable, it went unnoticed. You all missed it. Take a look around you, then put two and two together. Everyone is still here. Right? So, no one got raptured. Not one person—living or dead—was worthy enough. Do you see any graves that have opened up? There were neither living nor resurrected saints ‘caught up.’ Not even the born again believers. No one met the qualifications. No one was good enough. Not one. Not me, not you. So face the facts: the rapture took place, but the whole human race failed. This gives new meaning to epic fail. Everybody was left behind; everybody, that is, who was human.

All of you expecting fireworks missed the rapture that did happen–the bear rapture. All the bears disappeared. Why didn’t anyone notice? Have you not noticed there aren’t any bears? God must like bears. Not until this morning when I heard on the radio about the one bear spotted in south Jacksonville roaming the neighborhoods did I figure it all out. It must be lonely, not only being the only bear left, but also knowing God found you unworthy. Poor bear. If it were me, I couldn’t bear it. No pun intended.. 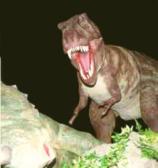 Biologists tell us that a lot of species are disappearing from the planet. They call it extinction. Scientists estimate that 99.9% of all species that have ever existed are now extinct. This is because God loves them. It is typical of scientists to not know how God works. In actual fact, these species did not go extinct. They were raptured. It started with Tyrannosaurus rex. God so loved the T-Rex, He drew all of them into heaven. And now they populate heaven. This makes heaven not quite the place people usually anticipate.

Then it was the Dodo’s turn: 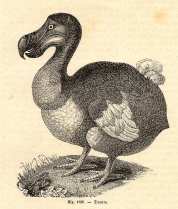 The list of the raptured now includes the Mariana Mallard, New Zealand Quail, the Moorea Reed-warbler, the Pig-footed bandicoot, the Lesser Bilby, the Bali Tiger, and so forth. Prairie dogs believe they are next. 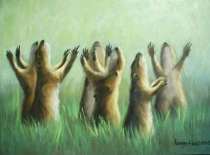 Other species are dying in massive numbers, enough, one would think, to merit rapture: 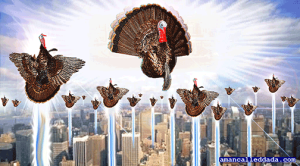 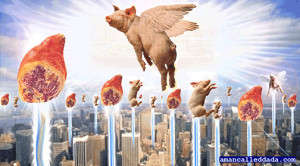 In the future, we will have to keep our eyes open, for other species’ raptures.

Now, if you will be so kind, please take this message and post it on FaceBook. Also, paste it into the body of an email and highlight and underline all the most IMPORTANT parts. Add a few helpful notes. Then, address the message to everyone you have an address for. If you use Twitter, Pinterest, Reddit, whatever, get the word out that way. By providing the exact details about the fact that the world has ended and the bears have been raptured, no one will be able to claim they didn’t know and persist in justifying their ignorant views.