Call me (!!!_x_110%)=?  There was a troll convention under the bridge last Saturday in Jacksonville.  According to my Old Norse sources, these beings used to dwell under bridges and were not Christianized.  They mainly live on the the Internet now.  But Saturday they were out, with names like FactzHurt, Bush43, RatherBeRight, NatRaz, dv8, chesterviolet, eeek, Weev, maddog, Harbinger of Doom, boo_radley, and madlibrarian.  It was a fest of obstreperousness.  Snark galore.  At last I have found my people!

Having found them, I was inspired to rename myself.  So, from now on, please do not refer to me as Lemule Blogiver.  Address me by my new screen name.  All we know about Ishmael in Melville’s Moby Dick was that he wanted to be called Ishmael.  Ishmael wasn’t his real name.  That was his screen name, had they had screens back then.

Please accord me the same courtesy.

Usually you only see trolls one at a time:

However, Saturday morning while I was walking along Riverside Avenue and passing under the Fuller Warren Bridge, the splendor of the troll world burst upon me.  Hundreds had amassed.  It was like the inside of a medieval cathedral—full of trolls! 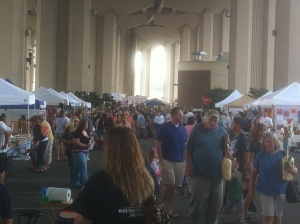 What had brought them out?

Evidently trolls occasionally still come out to spend time under bridges.  For nostalgia’s sake, I guess.  To reminisce about a simpler time—before the Internet—when all they did was hang out under bridges.  But now there is so much to talk about.  They have given birth to a whole new vocabulary, with terms like snark attack, snarkfest, snarkabratory, snarkalec, snarkalepsy, snarkicism . . ..

A much maligned species, many negative stereotypes circulate about trolls, such as, that they are scabrous, semi-crapulous, and puerile.  So unfair!  Are you one? 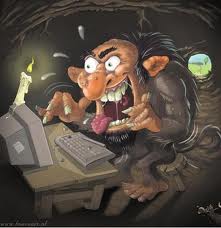 Unjust and groundless popular misunderstandings circulate that Internet trolls hide behind screen pseudonyms as they harass people, making snide remarks or leveling invective.  This notion began when Mattathias Schwartz’s story ran in the New York Times in 2008: The Troll Among Us

Columnists like your paper’s Mark Woods join in the piling on, maligning trolls by accusing them of hiding behind made-up names.

I don’t see Woods getting all snippy about Ishmael wanting to be called Ishmael, even though that wasn’t his real name.  And what about the name Woods?   What kind of name is that?  That name is SO monosyllabic! SO non-alpha-numeric!  SO lacking in symbols, punctuation, diacritics, ligatures, ampersands, and underscores!  SO 20th century!  If my last name were as conventional as that, I would chuck it and assume an alluring and mysterious screen name, something like mine, (!!!_x_110%)=?

The anti-troll mob is joined by nincompoop Tamar Loves Grandes, who, in “The 18 Types of Internet Trolls,” claims many troll-types exist, all of whom are are small-minded, cowardly, mean-spirited, semi-professional smart-asses who go on the web to make belittling comments or insult people they don’t even know.  Her malicious attack piece appeared in Smosh.com, which features articles that have numbers in the titles, such as “20 Funniest Tweets by Cartoon Characters,” and “7 Most Offensive Disney Characters.”  Even though I had never heard of this site before today when I found, it, I’m now officially boycotting it.  Besides, that name—Tamar Loves Grandes—oh,come on!  Give me a break!  That’s as made-up a name as Ishmael.

This College Humor skit presents yet another defamatory portrayal of the poor maligned troll.  But then—it’s “college humor,” isn’t it, so what would you expect.  Consider the audience it is intended for.  College students are callow and tasteless; they’ll laugh at anything, no matter how cruel.  Watch and see how it makes trolls out to be completely unreasonable, vitriolic, gratuitously offensive, subhuman entities . . . .

And watch this!  Or listen, actually.

This young woman does not give trolls the respect they deserve.  But who is she, anyway, to talk!  In fact, just listen to her.

So, you must see now how pervasive are the ignorance about and prejudice against trolls.  Trolls are just people who make their views known, whether anyone asked to hear them or not.  Now I announce proudly who I am.  I am a troll.

I have now made my views about trolls known. If you read this far, you must have wanted to hear them.

To wrap up, Ishmael was a screen name.  At least he didn’t say, “Call me Starbuck,” the chief mate on the Pequod.  Then he would have been impersonating an officer.  That’s a big deal.  So, please accord me the same courtesy.  Call me (!!!_x_110%)=?  I guarantee I am not impersonating anyone, least of all an officer or a purveyor of caffeine.  So call me that.  Or else I’ll leave baffling statements on the comments section of your blog, like “F*CK YOU AND YOUR DOG WIFE, FISHFACE!!!”

And see you next Saturday morning at the snark fest, my troll people, under the Fuller Warren Bridge!