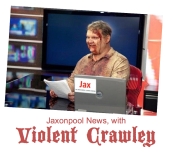 You can’t go home again, Matt Shirk:  News broke today that at least two months ago Michelle Shirk threw her husband, Matt, out of their Avondale home.  Ever since, he has been sleeping at an undisclosed location.

Wait! This is the wrong graphic.

Unaware of the address change, Times-Union reporters Topher Sanders, Matt Dixon, and Larry Hannan for the last week have been staking out the couple’s residence 24/7, hiding in the bushes.  “We are flummoxed,” said the three in a joint communiqué released after news broke that he wasn’t living there.  “Although we’re bug bit, sun burnt, scratched up, and sleep deprived, we’ve yet to get a statement.”

Goofed again with the graphic

“I wish someone’d told us he’d moved out,” disgruntled T-U reporter Larry Hannan told the Jacksonville News.  “Crouching behind the shrubbery all day and night is a drag.”  Hannan said the reporters initially hoped to catch Shirk at the Public Defenders Office, the institution he runs.  However, records not yet altered or destroyed indicate he has not spent much time there either.

Now all Jacksonville is asking: where does Shirk call ‘home’?  Even Carmen Sandiego is asking, “Where in the world is Matt Shirk?”  “Probably sleeping on his brother’s couch,” said an anonymous source.

The problem of getting Shirk to make a statement could be solved easily by Shirk himself.  Elected officials caught committing hanky-panky, or worse, usually schedule press conferences at which they deny the charges while their wives stand dutifully by, declaring they love their husbands, despite what they’ve done.

However, Shirk has failed to do even this.  (See Saturday update: Shirk admits inappropriate texts, disputes allegations of former investigators   Michelle Shirk does not seem to have been present when Topher Sanders interviewed him.)

Damn, that’s not Shirk, but an actor playing Anthony Weiner

The two fired female employees Shirk originally hired out of Whiskey River have procured legal representation.  It is generally considered “wrongful termination” when the wife does the firing.  Closing the San Marco library for several years should cover the city’s liability.

One thing that can be said: at least the women weren’t hired away from Hooters.

In any case, everyone knows that not much happens at the Public Defenders Office.  It’s a sleepy place.  The city has little to lose if it is run poorly by someone not showing up for work.

Just like the Duval County Supervisor of Elections Office was—sleepy—during the 2000 election, when John Stafford was out of the office due to health problems.  No serious consequences ensued, except a small one Juan Williams, then of NPR, noticed: Bush v Gore decided in Duval County.  Nothing much.

Except maybe some pesky French filmmaker like Jean-Xavier de Lestrade.  In 2001, he chronicled the case of Brenton Butler, a Jacksonville fifteen-year-old wrongfully accused of murder.  The case and the city became famous (or is the word infamous?) around the world.  Lestrade won an Academy Award for his documentary

But even after such bad worldwide publicity—the worst possible—Jacksonville is still here and is still pretty much the same place as it has always been.  Same as it ever was.  The story of our city’s trying to overcome international embarrassment but refusing to change represents the triumph of the human spirit.