DSM-5: Out to get me!  The fifth edition of the Diagnostic and Statistical Manual just came out. Over-educated elitist bureaucrats met in an undisclosed location and took secret votes determining which of us will be considered insane. I have no doubt they had me in mind.

The American Psychological Association (APA) has a long-term agenda. They want to open the door to tyranny by creating a diagnosis of “binge blogging.” That will appear in the DSM-6, to be released in 2018. That diagnosis will become a pretext for rounding up patriots who blog. “Crazy Panels” run by liberals will send us to mental institutions. We’ll all be labeled lunatics and “Internet Trolls.” And the first one they’re gonna come for is me. Because I dare speak truth to the liberal media. .

The changes upcoming in the DSM-5 are camels’ noses, like: Asperger syndrome now will appear on the autism spectrum. Hypersexual disorder (sexual addiction) will not be included. But Internet gambling is going in. And so is male binge eating: Binge Eating Among Men Steps Out of the Shadows

And Disruptive Mood Dysregulation Disorder (DMDD) will mean a child will have to have at least three tantrums a week for a one-year period to be diagnosed as such. Hoarding disorder and excoriation (skin-picking) will also now be legitimate disorders: What Effect Will Changes To The DSM-5 Have On People With (And Without) Mental Health Issues?

I consider all of these changes a direct threat to me. As I always do. By threats, I mean changes. Changes are always a threat. Threat and change are synonymous. They’re the same things: changes are threats to the status quo. Which I like. The status quo, I mean. The status quo, by the way, is just fine. People always want to fix what’s not broken.

According to the APA’s press release, “Internet addiction was considered for this category, but work group members decided there was insufficient research data to do so, so they recommended it be included in the manual’s appendix instead, with a goal of encouraging additional study.” In other words, they want to expand the term addiction and apply it to all sorts of behavior. Like blogging. .

The APA soon will create classifications for “patients” who suffer withdrawal symptoms when they are deprived of Internet access. But that’s the point! When I’m cut off from the Internet, I’m deprived of who I am.

This seemingly innocuous talk about mental health is just the camel’s nose. Listen to one of these ‘experts’: “There is substantive research that supports the position that [many activities conducted on the Internet] are very similar in the way they affect the brain and neurological reward system . . . . Both are related to poor impulse control and the brain’s system of reward and aggression.”

Make no mistake: this is liberal psycho-babble for legitimizing mass round-ups of the conservative blogosphere.

Blogging will be labeled an addiction—a mental health disorder. There will be calls for intervention, rescue, and recovery. Writing a blog? The montra will be, “Help a Loved One Overcome Addition.” 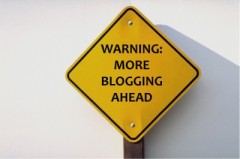 The jackboot is going to come down from the mental health professionals. That’s why I am speaking up. For the good of America. Which is in decline. Because the moochers.

When I look at the new DSM-5, here is what I read: “We are opposed to freedom. Your freedom. And we are coming to take it away.”

Therefore, I am redoubling my blogging efforts, to defend liberty. By blogging.

I am blogging my way to freedom!.