Vegan strip clubs — isn’t that a hoot!  Everyone in Jaxonpool is laughing at wacky Portland.  No wonder there’s a show called Portlandia.  Aren’t you glad there’s no nonsense like that here?  We in Jaxonpool never pass up the opportunity to sneer at such foolishness because we’re about being 100% common sensical 24/7.  We’re a city of good, solid morals, and we’re devoted to doing what’s right—upholding our values, conserving tradition, and defending our heritage.  Here there’s no iconoclasm, irreverence, or heterogeneous ideas yoked by violence together, like vegan and strip club.  Jaxonpool women shave their armpits.  That’s why people want to live here.

Not having anything like vegan strip clubs gives Jaxonpool a golden opportunity to set itself apart by advertising how sane we are by comparison.  I suggest we pass a city ordinance officially banning vegan strip clubs.  We should just say NO!  NO VEGAN STRIP CLUBS in our city!  Our strip clubs will serve only alcohol and red meat.  Let the world know the difference!  Portland’s strip patrons are vegans.  Ours are carnivores!

The fare served at Portland’s versus Jaxonpool’s strip clubs provides one more way for our city to further define its culture.  In other words, Portland’s reputation for encouraging the strange, eccentric, and exotic allows Jaxonpool to reinforce its own image for doing the exact opposite.

Jaxonpool already has established its own well-deserved and nationally recognized identity.  Slate Magazine characterized the city as “average” (The Most Average Place in America Is Jacksonville, Fla.), or at least it did until The Jaxonpool Jerk forced it to make a retraction (Slate retracts “average”).  But The Jaxonpool Jerk was wrong to make the magazine do this.  What’s so bad about being average?  Isn’t that an improvement over where we were twenty years ago?

I say we should build on where we now are by strengthening our average-ness, our averagi-city, if you will.  How?  Jaxonpool city council members should look at whatever Portland is doing and then pass measures insuring that similar activities never occur here.  Anything that smacks of being even remotely weird should be discouraged.

Portland and Jaxonpool are two cities divided by a river.  However, beyond that fact, the similarity ends.  In every other respect, Portland’s the complete opposite.  Jaxonpool’s purpose is to be as different from Portland as possible.  For example, if Portland is about poetry, then we’re about prose.  Let us shout it from the rooftops, proclaim it loudly to the world:  YOU  WON’T  FIND   POETRY  HERE!  We’re proud of the fact that we’re a city without poetry.

The problem with Portland is that it has so many thought-provoking things going on that it becomes annoying.  Who wants their view of the world constantly being challenged by things like vegan strip clubs?  Who likes surprises around every corner?  Who likes stumbling upon activities or ideas never encountered or thought of before?  Who likes things that aren’t black and white?  Who’s comfortable living with ambiguity—with uncertainties, mysteries, doubts?  Only weirdos.

Energetic twenty-something weirdos have overrun Portland, so it brags about being weird.  By contrast, Jaxonpool has been overrun by aging average Joes.  Weirdos vs. average Joes—it’s no contest!!!  So we brag that if you move here you’ll never again have to deal with anything weird.  Moreover, never again will you . . .

In light of our mature demographic, the city’s PR people should tout its urban character as the best there is when it comes to being AVERAGE.  Jaxonpool is an averagi-CITY.   We’re all the AVERAGE you could ask for.  AVERAGE doesn’t get any better than this!  Our version of AVERAGE comes in so strong a dose that sometimes it’s characterized as multiple, severe, and profound.

Measures must be put in place to uphold our culture of extreme normality.  For starters, vertical gardens—ones that grow on sides of tall buildings—should be prohibited in Jaxonpool.  Think of all the leaves dropping and the need for cleaning up sidewalks below.  Branches and squirrels may fall on passersby.

Also, Don Redman aside, the Jaxonpool city council should continue to do everything it can to discourage the use of bicycles.  Bicycle use creates clutter on the road and cuts into Gate Petroleum’s revenue.  Moreover, refusal to use bicycles forms part of our identity.  What could be more un-Jaxonpudlian than to ride a bike?

Jaxonpool’s city council needs to clamp down on naked bike riding before it even starts.  And nakedness is not the only evil associated with cycling.

Additionally, city leaders will want to make certain that scenes such as this never occur here:

Besides discouraging bike use, the city council should pass a resolution rejecting light rail.  Orchestrated by authoritarian leaders in command economies, light rail is nothing other than a human sewer.  Besides being socialistic, it impedes traffic.  One only has to witness Portland’s TriMet MAX to grasp what a nuisance it is. 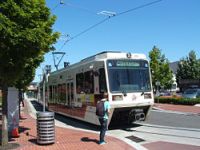 Sometimes clashes occur between bicyclists and light rail, and these clashes are all the more reason why the city council should ban both:. 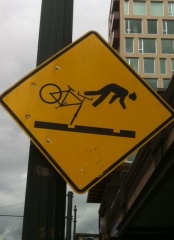 Proof we should prohibit both light rail and bicycles

Here is something else our city leaders need to head off: special parking places set aside just for expectant and new mothers.  What is this world coming to?

But the most socialistic, insidious evil of all are the parking spaces designated for all-electric vehicles.  These spaces allow these vehicles to recharge while parked.  It’s not too late!  Legislation can stop this!

And then there are Portlanders’ strange culinary desires.  The city’s numerous boutique neighborhoods offer many independent ice cream shops that make a big deal about the salt they use.  Lines of patrons trail out the doors.  You’d think it’d be the sugar drawing them in, like normal people, but no, it’s the salt.  Jaxonpudlians prefer sugar, in massive amounts.  Part of the unique charm of Jaxonpool is how big its inhabitants are and the city’s high incidence of diabetes.  These two factors truly set us apart!

But most importantly, Jaxonpool must continue discouraging independent ice-cream entrepreneurs to the advantage of the big national chains like Bruster’s, Coldstone, Baskin Robins, and Marble Slab.  Sweet Pete’s must be crushed..

And then there are the food carts.  My God, in Portland, they let people eat from carts!  Where’s the human dignity in that?  This calls for a law.

But then, there is one Chinese restaurant in Portland that Jaxonpudlians could relate to: 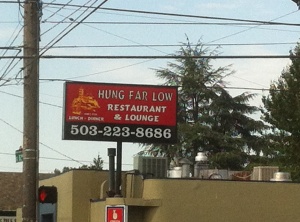 Last of all, the Jaxonpool city council need not legislate one thing.  We Jaxonpudlians can rest assured we will never see an equivalent message here: 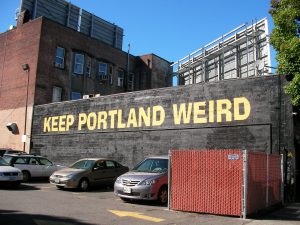 We will never see these words on a wall or a tee-shirt: “Keep Jaxonpool weird.”  I guarantee it.  It’s just not in the city’s urban DNA.  In fact, it’s the lack of any weirdness whatsoever—even a wee tincture—that makes Jaxonpool what it is.  (Except maybe in Riverside and Springfield—people in those neighborhoods are kinda weird, so I never go into them.)

Our identity lies in being multiple, severe, and profound.  That’s our diagnosis, and we’re sticking with it!  We are an averagi-city!  We celebrate being all prose and no poetry.  Graffiti artists, get to work: “Keep Jaxonpool Average!”  I myself am going to order a tee-shirt.

Now, about those vegan strip clubs.  If I were to travel to Portland and go into one, I don’t have to order any food, do I?  It might have something green in it.  Long ago I took a vow never to eat anything green that grows out of the ground.

One thought on “No vegan strip clubs!”