Hurricane Concerned It Caught Something In Panama City, Florida, from
The Onion, Sept. 2 ⇓

“TALLAHASSEE, FL—Saying its eyewall had swollen up in a “pretty ugly way” in the time since it left the popular spring break and party destination, Hurricane Hermine expressed concern Friday that it had caught something while in Panama City….” Continue reading

“’Inside Jokes’ published at The Fem!“ (Aug. 22). On the Blink, by Emily Michael. Considering how my light is spent. Blog posts, music reviews, and published articles from a blind writer, musician, and Jacksonville English instructor. Read 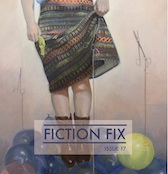 Fiction Fix begins the celebrations of its 15th year by announcing its demise. Edited and staffed largely by UNF alums and students, the journal has relentlessly published excellent stories and visual art for a decade and a half. Its editors and staff, its overlord and masked advisor, are delighted to sing its swansong in 11 fabulous new stories accompanied by the remarkable artwork of Dimelza Broche. Fiction Fix, Issue 17
.