Robert Frost wrote, “I shall be telling this with a sigh / Somewhere ages and ages hence: / Two roads diverged in a wood, and I, / I took the one less traveled by, / And that has made all the difference.”

Here I am in the midst of grumpy male menopause, having reached the point that once seemed “ages and ages hence.”  Me?  I chose the straight and narrow path.  The high road.  “With a sigh” I now look back and ponder the road not taken.  What did I miss?  What did that road I passed up lead to? .

Oh, God, it led to so much!  To so much fun, that is.  Not only would that road eventually lead to keg rodeos, cherry bomb shots, and beer bongs . . .

Beer bong at the beach

In case you missed it, in September it was reported that the University of Tennessee suspended a fraternity for thirty days after one of its members was dumped at a hospital with a blood alcohol level over .0.4 percent.  That percent is five times the legal limit for driving.  It’s within what doctors call “death zone” alcohol poisoning.  The 20-year-old student hadn’t been drinking, exactly.  According to Knoxville police, he and his Pi Kappa Alpha frat brothers had been giving one another “alcohol enemas”:  Butt-Chugging: Students, Experts Recoil At Alcohol Enema Case

This alternative way to ‘drink’ gives the term Booty Call a whole new meaning.  And those Pi Kappa Alpha frat brothers have good taste.  They didn’t resort to crass hard liquors, like vodka or whiskey.  No!  They demonstrated finer instincts by choosing to butt chug with wine, as this commentator points out:

Now, late in life, I think back to an earlier time, to when in my youth “Two roads diverged in a yellow wood.”  And I’m flooded with regrets.  I chose the path of the straight and narrow.  The high road.  At least, I think I chose the high road. 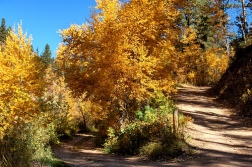 Two roads diverged in a yellow wood, but one was the higher than the other

Except, the other day, I met up again with an old buddy.  We spent some time together.  And he showed me a photograph.  He said he took it. Of me.  Way back.  Nearly forty-four years ago.  In 1969.  When I was high on marijuana and LSD.  At Woodstock.

Which road was I high on?

Could that have been me, back in the day?  Gosh, I don’t recall.  That guy in the picture might‘ve been me.  Looks like me.  Sort of.  Trouble is, I don’t really remember much. .

Maybe I’m misremembering.  Way back when I came to that fork in the road, perhaps I didn’t choose the straight and narrow path.  My memory, as I said, is a little hazy.

I know “I took the one less traveled.”  But, could someone kindly remind me, which one was that?.

Santa, it’s so old-fashioned to drink from a flask!

In any case, it’s the holidays.  Time to enjoy ourselves.  So let’s get down, spread our cheeks, and imbibe deeply!  And maybe I can catch up on all the fun I can’t remember having.
.
C’mon, Santa, put that flask away.  Join us! You’re never too old!  Get your ass down here!  And let’s get Blitzen! 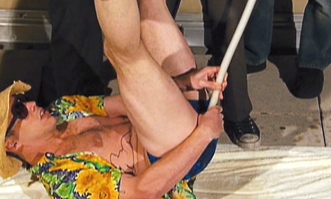 Usually you’re on your back by the end of the evening, not at the beginning..

One thought on “Alcohol enemas for the holidays”